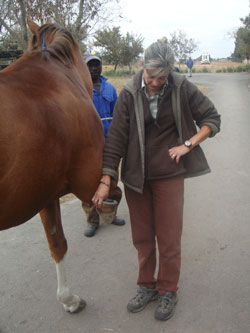 Dr Hildegard Setzkorn is the driving force behind Chartwell Equine Clinic. Situated at the Equicare Hospital, Midrand, South Africa. An area often referred to as being: the pulse of South African equestrian sport. This means that Dr Setzkorn works with many of the top equine athletes found in South Africa.

The love of working with, and treating horses is what drives Dr Setzkorn. To say that she works, eats and sleeps horses is no exaggeration. Her average day starts at four in the morning. This is when she fits in time for her five dogs, cat, two parrots and family. Every morning before making her way to the clinic she will first work her horses, Andorra and Elevation. Both with whom she actively competes in dressage, and who have represented the Gauteng region in their respective grades.

On arrival at the clinic, the first case of the day was a horse that had undergone emergency colic surgery the previous evening. Montego, had the previous day competed in a dressage show. On the completion of his second test, his owner, having realized that something was wrong, moved the horse directly to the clinic from the show grounds. On arrival he was treated with medication, and seemed to respond. However, by six o clock they realized that it had gone beyond medication, and rushed him into theatre. His large colon had become entrapped between the spleen and kidney, requiring surgical intervention.

The following morning as a result of the initial impaction, the horse developed reflux. This meant that the stomach had to be cleared out by means of tubing. This was done by inserting a tube into the horses’ nose, down the esophagus into the stomach. Warm water was then poured down to loosen the food, after which, suction was applied to remove the contents along with the water. This had to be done every two hours, throughout the day. 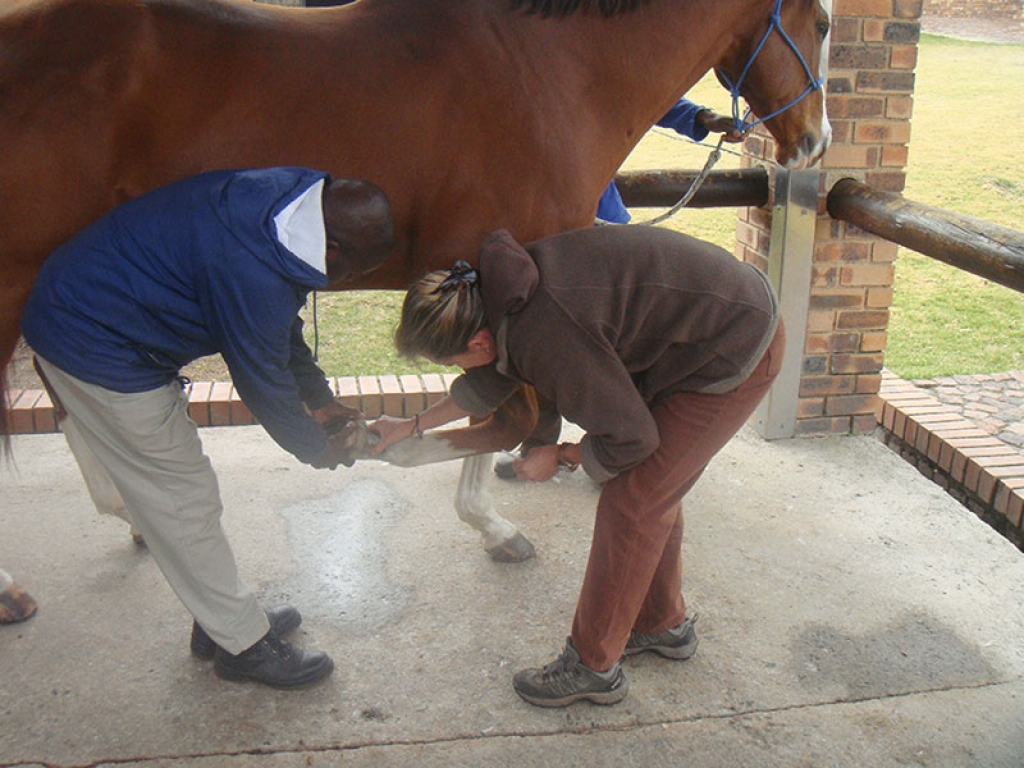 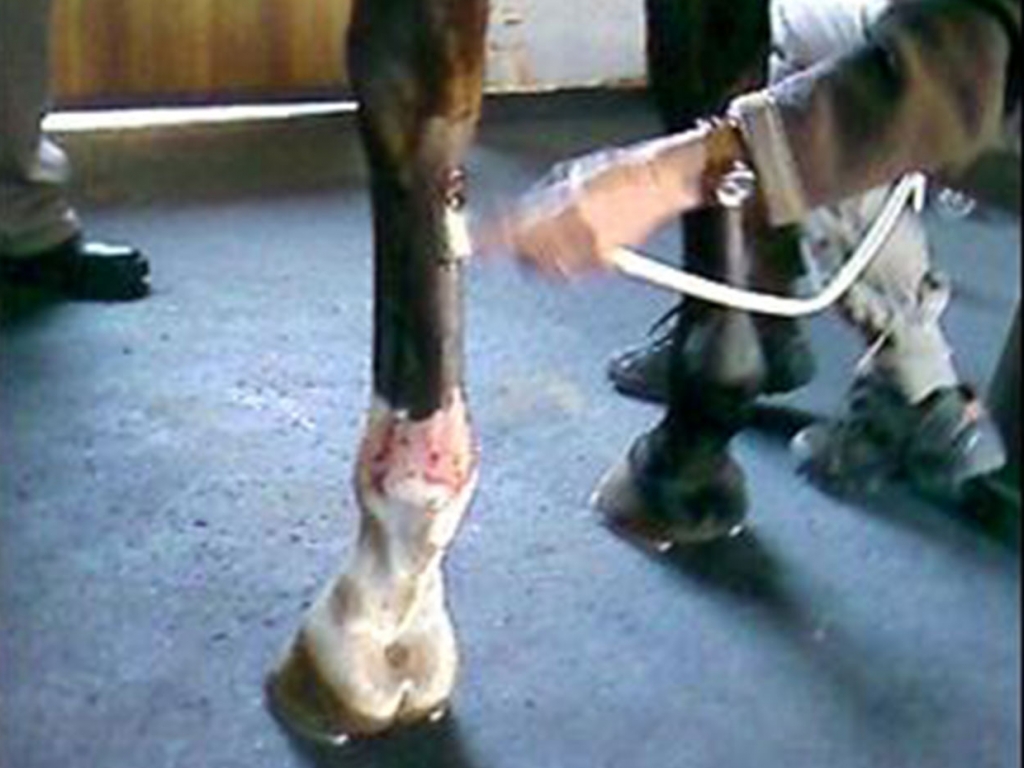 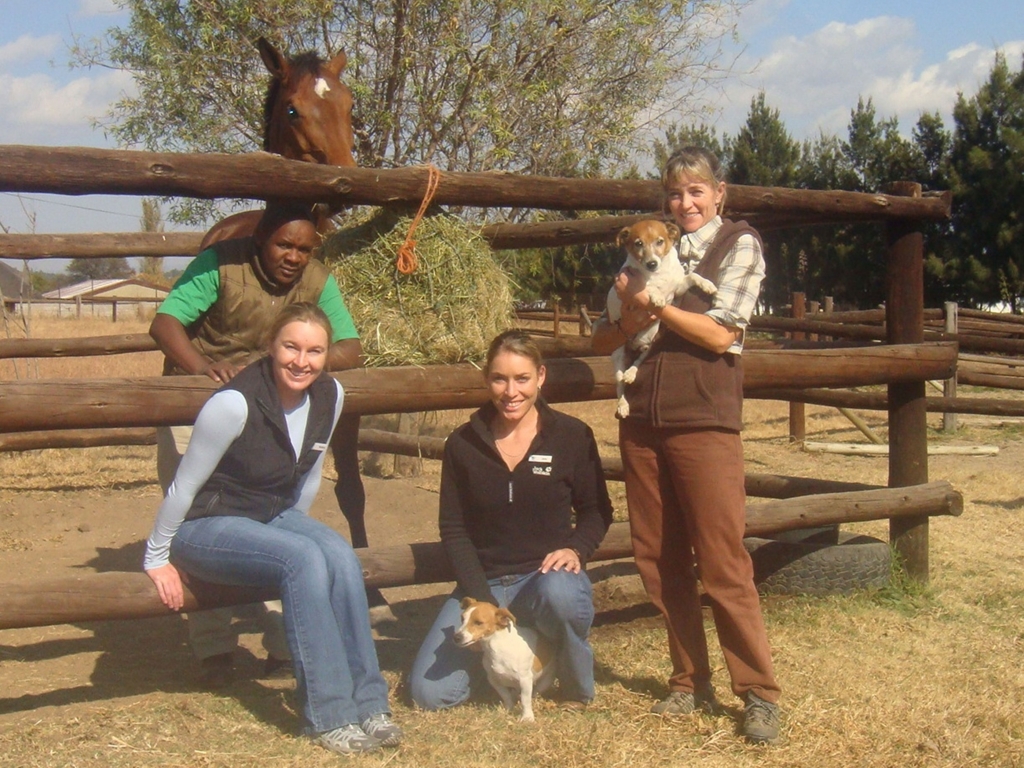 Next up was Mystic. A dark bay Thoroughbred gelding, who could barely step on his foot after having suffered a fetlock injury. He’s an aged horse having spent his life after retiring from racing, as a competitive stadium jumper. He was taken for an ultrasound and an x-ray. Which revealed that he had developed arthritis. His owner was advised to retire him.

The last of the mornings’ horses was Takara, an imported KWPN (Dutch Warmblood) mare. She had come in for a follow up scan regarding a suspected tendon injury, on her left front leg. The mare, having already been treated and rested for three weeks, was sound at the walk. However trotting out on firm ground, revealed an unwillingness to reach forward and step out. She was then taken for an ultrasound scan.

Takara, having suffered a similar injury on the opposite front leg the previous year, was found to have actually injured her check ligament. The owner, whom had hoped to compete her in a Word Cup Qualifier in August, was advised to rest her for another six weeks. Thus allowing for the check ligament to recuperate properly, before any future jumping is undertaken.

An informal staff meeting followed. Where her assistant Dr. Jeanne joined, after having spent the morning doing follow-ups, and treatments on the previous call outs. Changes and improvements were reported, as well as future treatments discussed. After which preparations were made for the afternoon callouts.

This involved a bay gelding named Fonzy, who seemed to suffer of chronic lameness. The horse, which had previously been sent to The Onderstepoort Veterinary Institute for diagnoses, was sound on inspection. However, under saddle appeared lame. The owner was now at tethers’ end, as Onderstepoort had been unable to detect any cause. A change in his work routine was suggested, as the cause may be psychological in nature.

When asked: What important attributes should present when one considers becoming an Equine vet? Dr Setzkorn answered, “A genuine love for working with horses, and an interest in equine welfare, are what I would consider the most important attributes.” She also forewarns any students that spend a day with her, “That being an equine vet becomes your life. The hours are long. You also never know when might be home tonight, or whether you may be called out tonight.” and that, “ Working with horse is physically demanding. Horses are unpredictable, and you could easily be hurt. They are bigger and stronger than you, and you cannot explain to them that you are trying to help. Many horses also do not like injections, which are often painful.”

“The most difficult part of the work for myself, and most probably all equine vets, is when I have to tell owners that there is nothing more I can do to help their horse, or when a horse dies. Most owners, like myself, share a very deep emotional bond with their horses, and knowing what pain those words inflict, makes it very difficult.”

The interesting part of the work for her is: “That I’m faced with new challenges everyday. I often feel like a detective, looking for clues to a mystery. Then once having to found the cause, having to decide on the best available treatment.”

When asked whether South African vets are just as well equipped to deal with cases, and injuries as other vets around the world. She was quick to reply that they are. This because of worldwide conferences and the amount of information shared. Vets the world over have access to a vast amount of available research and development. Many vets also travel, and work their internships throughout the world.

Behind every good vet, there’s a team of people who supports, and allows for them to concentrate on what is important: The treatment of animals. In charge of the daily running of the clinic, bookings, ordering of medication and accounts, are Jana and Nadine. Dr. Jeanne an assistant vet, deals with most of with follow up treatments on call outs. She also assists with surgery and general hospital cases. The Equicare Clinic also boasts a team of well-trained vet assistants and stable hands. Who not only see to the management of the stables, but also assists with the preparation of horses for treatments and procedures.

“Ever since I could remember, I’ve wanted to be a vet, and to young aspiring vets I often say: Spend as much time as possible with vets, different types of vets. You’ll need to get a feel for the work involved, and whether you’d be able to do it. Many students here do not complete their studies, mostly because they only realize halfway through them, exactly what the work involves. You’ll also need to study hard at school, and excel in subjects like math’s, science and biology.”